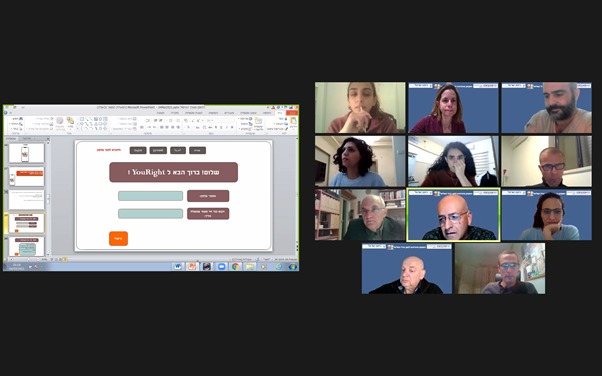 Right after the lockdown was lifted at ORT Braude, a crew from Arabic-language Makan TV (affiliated with the Hebrew KAN channel) arrived on campus to pay tribute to the young women who recently won awards in college hackathons. Their report aimed to highlight the growing trend of entrepreneurship among the Arab community – which, it turns out, is alive and well among the engineering students who are making their mark at ORT Braude.

The film crew heard from college president Prof. Arie Maharshak, general manager Achiav Golan, and the students themselves about this positive trend, which the college has fostered in recent years. ORT Braude aims to encourage an entrepreneurial mindset in its students, while also enhancing their creativity, vision, and teamwork skills. As Makan TV learned, these efforts have borne fruit, with remarkable successes in recent hackathons, especially among female students.

For example, Arij Zidan and Mona Basul from the Department of Biotechnology won the “Engineers for the Elderly” hackathon and a cash prize of NIS 10,000 from JDC-Eshel. Their “JUSTAND” group developed an effective solution to help fall-prone seniors improve their balance during exercise – a balance board, adapted by a physiotherapist, which includes a handrail as well as pressure and angle sensors. These sensors transmit information about the senior’s stability and grip strength to a remote therapist.

During the hackathon, the students were introduced to a range of challenges, for which they were invited to create innovative yet practical solutions, covering issues such as: technology and aging, rehabilitation and remote rehabilitation, digital literacy, retirement and employment, and so on. The students also learned the basics of gerontology (the study of aging) and attended lectures on entrepreneurship, presentation, adapting interfaces for seniors, and more.

Another hackathon, this time focusing on industry and the environment, was won by student Afnan Faraj with her partner Hamodi Hino, both from the Department of Electrical & Electronics Engineering. The ORT Braude students came up with a scientific way to extend the shelf life of avocados so they can be sold year-round. This hackathon was held as part of an ongoing collaboration between ORT Braude, Tel-Hai College, and the University of Haifa, and in cooperation with the Kibbutz Industries Association, the Galilee Development Company, and several other bodies.

The hackathon welcomed 14 heterogeneous teams made up of students, researchers, entrepreneurs, and industry professionals. These diverse teams competed to develop effective solutions to 7 real-world challenges, which were presented by representatives from industrial plants in the Galilee region that are dedicated to sustainability, the environment, and human welfare. Incredibly, three teams tied for first place with exactly the same number of votes, and received a cash prize of some NIS 25,000. Well done, everyone!

Press on the link to the Makan news broadcast (in Arabic). The report on ORT Braude can be seen at the 55:40 mark.